Curator: Estelle Pietrzyk with the expertise of Robert Kopp

The MAMCS exhibition, held in partnership with the Musée d'Orsay, lays a trail through the work of the writer Joris-Karl Huysmans (1848-1907). It presents the writings, works and objects that together contributed to forging the different worlds he inhabited. The trail is seen in a turn-of-the-century perspective, hovering between a fascination with progress and a morbid curiosity for the occult.

A noted figure of naturalism (considered as "Zola's spiritual son"), the chronicler of a rapidly changing Paris, an enlightened art critic, a Decadent author and Catholic writer – Huysmans was all of these at once. The roles were not mutually exclusive, but superimposed like so many layers of glaze under the brush of an Italian Primitive. “Exhibiting Huysmans” is a challenge, because such a project involves bringing together widely contrasting works, objects and writings: Edgar Degas' flesh-tints and Félicien Rops' shadows, precious volumes and medical treatises, elegant perfumes and knick-knacks. Huysmans is a word-hoarder and, regardless of what he is writing: newspaper articles, novels, personal correspondence or the like, he offers his reader glittering inventories woven from colours, materials and sensations.

A complementary and enriched version of the project developed by the Musée d'Orsay, this exhibition is designed as a series of paintings, each with its own atmosphere. It is arranged in ten rooms going from a boudoir to a Paris street, from the Salon to an evocation of the home of Des Esseintes, iconic hero of À Rebours (1884), and includes the favourite subjects of Huysmans' last years, architecture and religious art. The visitor is invited to discover a world in which disparate topics rub shoulders: ​​modernity (as seen by Huysmans) and Latin decadence, the Issenheim altarpiece and the Folies-Bergères, dream and melancholy.

The exhibition brings together a number of prestigious loans. It presents more than 440 works and artefacts coming from the Orsay and Orangerie museums (Manet, Degas, Moreau, Caillebotte, Pissarro, Gervex, Bouguereau ...), the National Library of France, the Paris Arts and Crafts Museum, the Museum of European and Mediterranean Civilizations (Mucem, Marseille), and in Strasbourg the National and University Library, the Garden of Sciences and the Museums of Strasbourg. 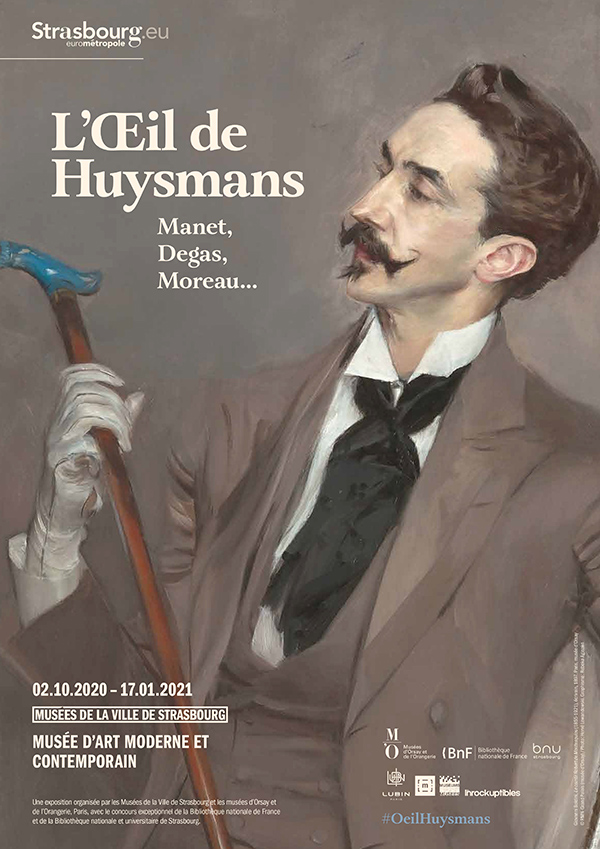